It's widely known: everybody is different and difference is the key to a successful society. Uniqueness drives you to happiness. What's less known is that uniqueness is not appreciated and tolerated by most children, they can be really and awfully cruel. Therse incorrect behaviors can come from different sources but it's not the point here, what's important here is that most of us have faced them at least once. They often create deep troubles in adulthood, and some times, lead to unexpected and irreversible actions. This is what Hugger is about.

Our awesome logo designed by Orelia

Back in December 2019 at HETIC, we had two weeks dedicated to work on a project in team related to the topic "tech and human". We were a team of five friends (Orelia, Constance, Nour, Elouan and me) and wanted a project that would be really meaningful and impactful. Two weekds to find an idea, do market research and make a working prototype.

After many discussions and brainstorming for almost two days, we all shared personal stories of more-or-less important case of harassment we faced. One point was clear: everybody was saying about themselves that it wasn't "real harassment" while others told them it was so. Even during interviews. It was clear that the vision of harassment was either it leads to suicide or it's not harassment. Our first mission was to make that there is no distinction between harassment cases, they all are as much important.

I have a friend who wrote a book about it, if you read French, you definitely should buy Au nom d'un harcelé. 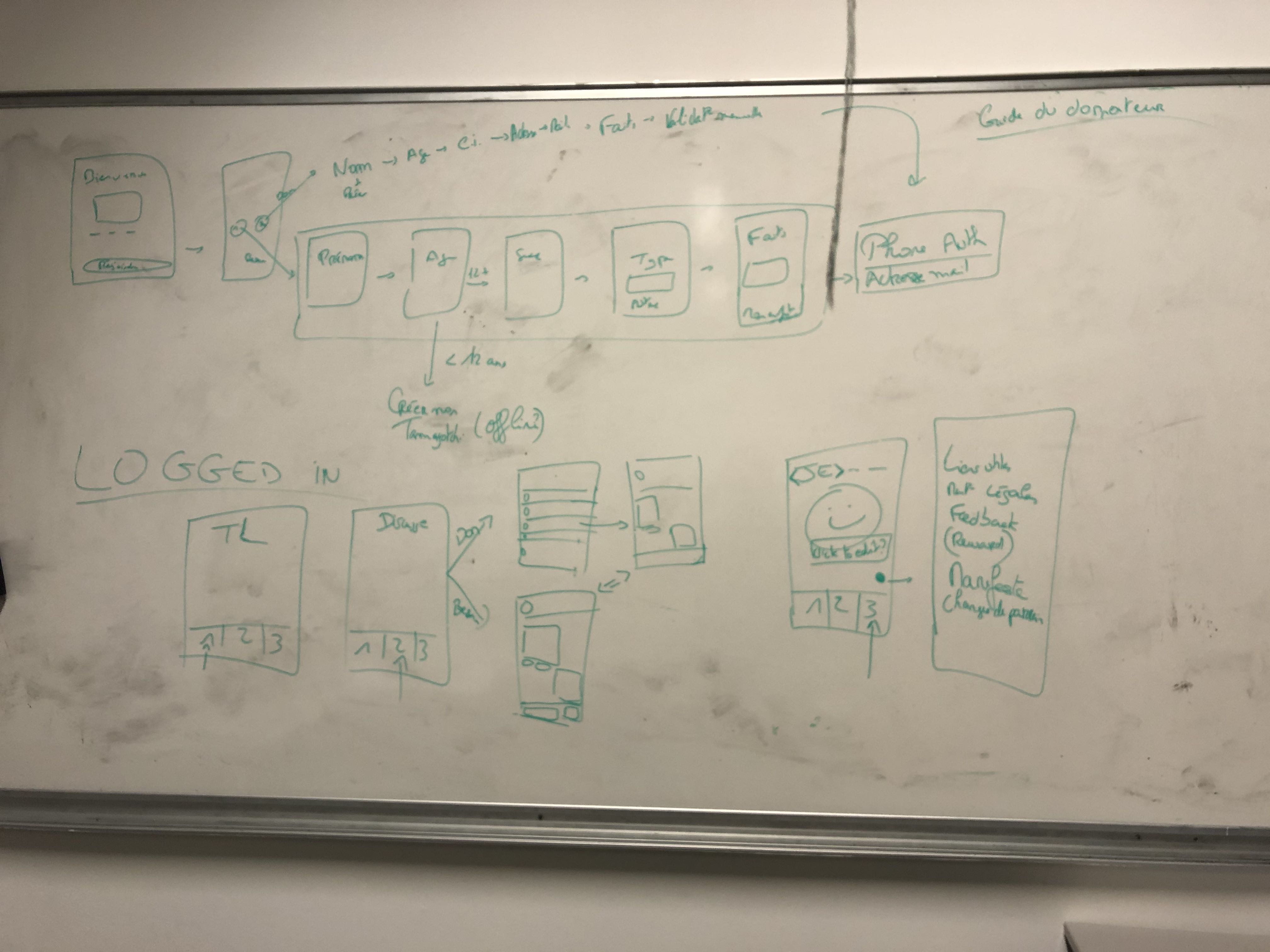 Trying to define the on-boarding

It was clear that something must be done. We had to think: what would be the best solution? We found out that most children get their first smartphone at age of 11-12 so we decided to make an app. But you can't forget 8yo as much as you can't have the same behavior pattern with them so we decided that under a certain age, the child would talk with a chatbot (on the familial iPad for instance) and that the parent would indirectly control. The child would be able to customize the mascot to their preference and to reflect their personality.

For older children, they would be called Huggy and talk to Hugger, a list of hand-picked students in psychology or medecine, everytime they'd feel the need to. As the Hugger can't handle everything, they have a emergency button to call either the firefighters, the police or the school principal. 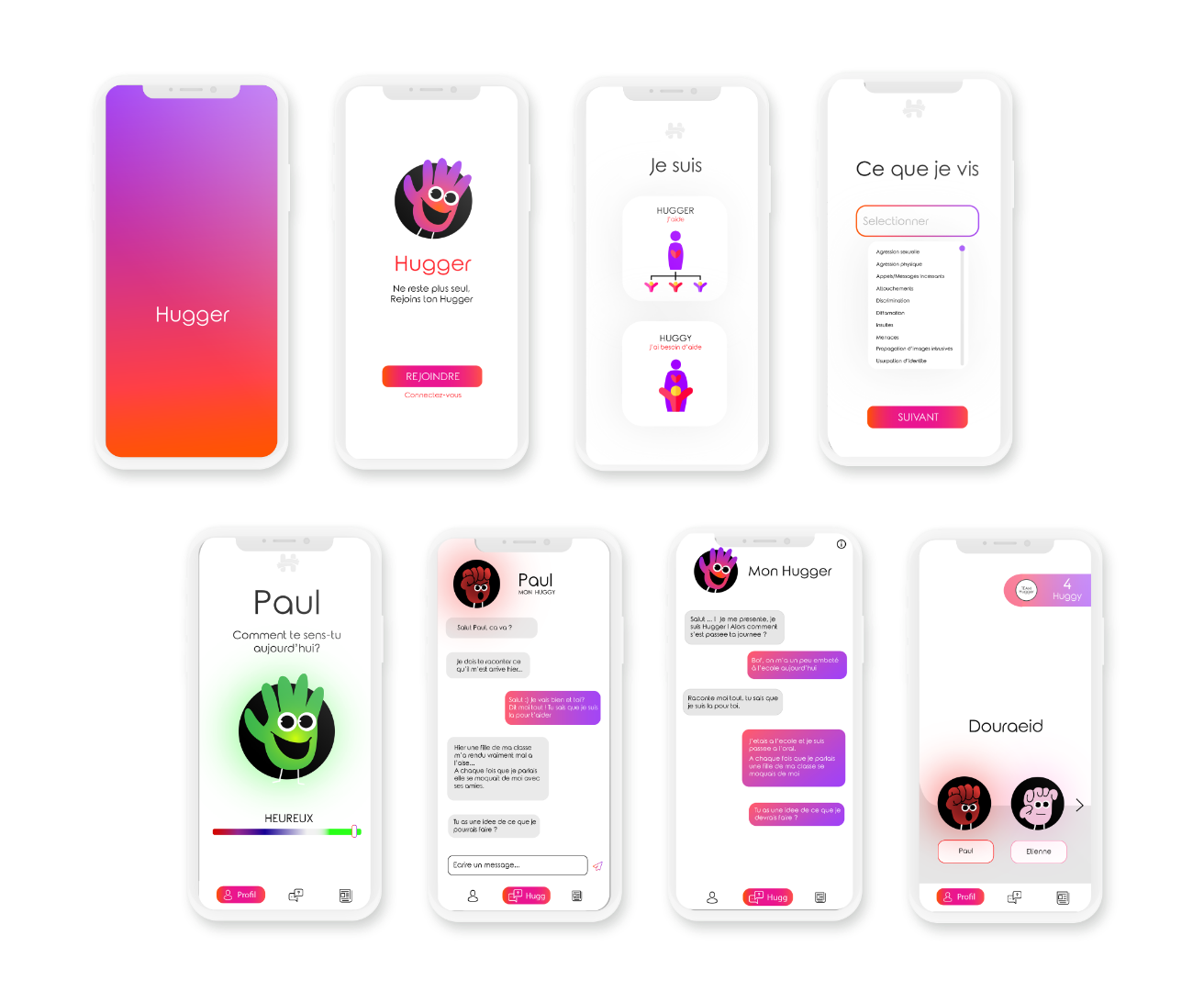 Mockups of the app

We made the choice not to prototype the chatbot as it would act like a classic bot behavior. The app was built day and night, almost no sleep in the last three days before presentation.

For those interested, the tech stack is React Native and Firebase.

The app worked correctly: from signup to manual approval of Huggers and instant messaging with mood alert. We were only missing Push Notifications to be a real app.

Why we haven't continued?

It was the first time in my schooling where I spent that much time without sleeping, completely devoted to the project and the cause we tried to solve. We tried to continue the app but when we called the legal authorities to know what's legal and what's not, it was clear we had to dedicate more time than few hours a day to make it legal and above all, safe from predators. We spent hours of discussions with GDPR representants and school principal to know if the problem was correctly addressed and how they could help us to promote the app inside their building.

I'd like to give a huge shout out to the whole team for their awesome work, we've shared really good insights during this week. Thanks Orelia, Constance, Nour and Elouan!

Have a look at their work, they're really good at what they do.